In 1999, the team got its first equipment made up of a Sgi Onyx2 with three graphic pipes and of three 1208S  Barco projectors with active stereo.
Projection is done on a curved wall 9m long, 2.4m hight and 3.8m of ray.

In 2004, we added a graphic cluster made up of three DELL 650-bipro with Nvidia FX30O0G graphic cards.

In 2006, onyx2 stopped so it was replaced by a new graphic cluster made up of three DELL 670-bipro with Nvidia FX45O0G graphic cards. 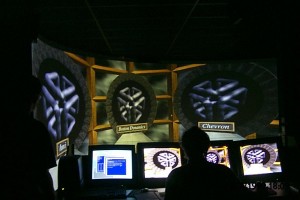 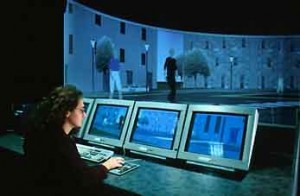 In 2007, projectors has been replaced by three Galaxy 7+ barco projectors. Infitec stereovision system is now also available.
We added permanently an infrared optical tracking.
We added a dedicated equipment to record sounds and images from the application and the users in a single flux. 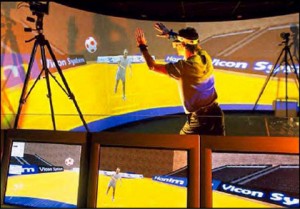 Some views of the construction steps of Immersia 3.