Introspect is a new ANR project, on the digital introspection of archaeological material.

It is a joint France-Quebec project.

Material culture and the relationship to its historical context and environment are at the heart of archaeologists’ concerns. Archaeological artefacts and sediments are fragile testimonies that should be analyzed, interpreted, preserved, and enhanced. This complex relationship is changing in the digital era where archaeologists have access to virtual representations of the object or a copy obtained by 3D printing. In recent years, digitization methods markedly progressed providing a relevant response with non-destructive solutions for preservation, analysis, and dissemination of knowledge on material culture and the built environment we work on. However, those analytical techniques are limited to the surface of the objects, monuments or sites. Yet, the structural information yielding information on the transformation of raw material and the contextual relationship of its acquisition and use is a key aspect that can be handled by innovative digital approaches.

We offer to archaeologists novel uses, tools and accesses to new knowledge through digital interactive introspection methods that combine medical imaging technologies such as CT scans with 3D visualization technologies, such as mixed reality (virtual/augmented reality, tangible interactions) and 3D printing. CT scans provides a cartography of archaeological material and a systematic record of its densities; further, it allows a three-dimensional reading of the artifact. Such method analyzes the inner part of the artifact without altering it and allows the specialist to define and understand its internal structure, method of manufacture and state of conservation. When applied to archaeological sediments, that technology opens a door to an array of behaviors unavailable to the naked eye. Mixed reality provides a new context to the object and enhance the interaction between the analyst and the subject under investigation. Multidisciplinarity brings a major methodological challenge, however, the approach we propose involves the pooling of methods used in engineering, archeology and museology. Team members were selected based on their experience in team work and experience in various domains of research. They all collaborated in joint projects where everyone’s experience was put to use.

This project is part of the thematic focus “research in social sciences in the digital era” by proposing innovative ways of working based on digitization for the analysis and use of data in cultural heritage studies. 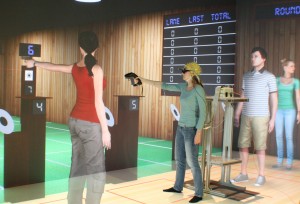 One well-known source of sport performance variability is the shifting of the attention locus from the task due to a disturbing environment. In this collaboration, we aim at studying the neural correlates of such attentional
shifts using scalp electroencephalography (EEG) in a virtual reality simulation. For this purpose we considered an Olympic virtual shooting scenario which requires a high degree of concentration and does not involve intense physical activity. The lack of physical activity ensures that EEG recordings will not be polluted with artefacts due to excessive movements. The experimentation was done at the Immersia platform which provided the optimal conditions to implement such a realistic sports scenario in virtual reality, assuring a high degree of immersion and providing an ecologically valid competition scenario. 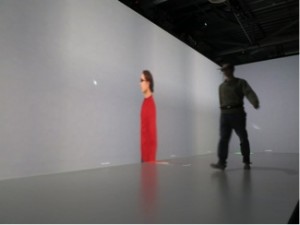 Our main objective in this project was to compare obstacle avoidance behavior between simple real or virtual geometrical objects as well as real or virtual humans with different affordances. We conducted a behavioral dynamics experiment, which revealed different avoidance behavior of participants towards the considered virtual objects compared to their physical counterparts. During additional pilot tests in the large walking area of the IMMERSIA setup we considered different potential contributing factors. We observed differences in distance estimates to virtual objects depending on the position of the observer in the projection setup. In order to formally investigate this factor we conducted a second experiment. The experiment revealed interaction effects between accommodation distances, stereoscopic parallax, and target distance on distance judgments in the projection environment, which provides interesting guidelines and vistas for future research. 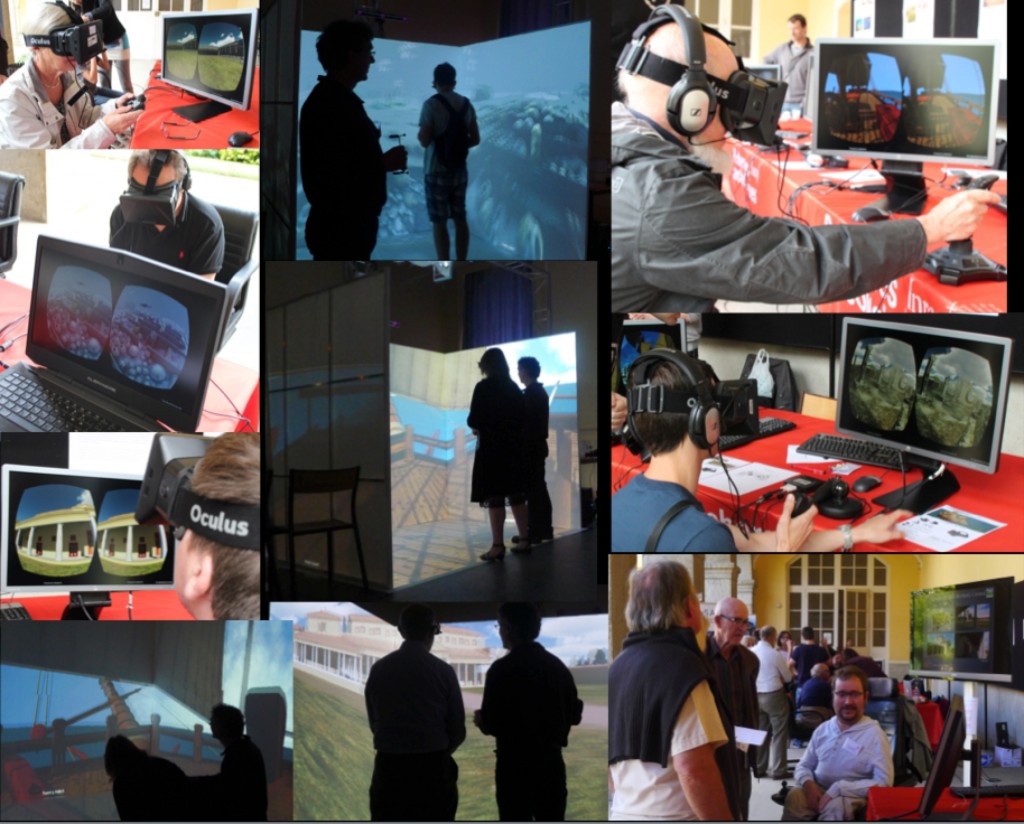 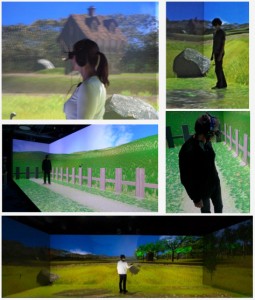 • Test the importance of spatialized audio in a VR walking experience, in a large space.
• Build an interactive audio-visual environment where the user walks around in presence of sounding objects.
• Test the interaction with the environment in different conditions:
– Sound is rendered with binaural techniques
– Binaural sound field is affected by a roto-translation
– Sound is rendered with stereo technique.
• Test the degree of immersion that the user can achieve in the different conditions
• Test the main differences that can be identified between those different kinds of auditory feedbacks. 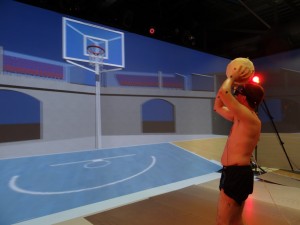 • Implementation of a free-throw simulator
– user-friendly interface
– modular program
– learning platform for people
• Increasing the quality and speed of learning
• Developing motor skills
• Multidisciplinary work
– Computer science, Virtual reality, Sports science, Biomechanics
• Immersia in VISIONAIR project was a unique chance to address the problem
• Basketball free throw involves
– large spaces (requiring large screens),
– high speeds (requiring high-speed tracking facilities)
– high accuracy (requiring accurate motion capture facilities).
• Technical facility gives the possibility to evaluate if immersive environments are promising means to improve physical performance.
– Many papers demonstrate that this type of environment improves motivation
– It is still difficult to demonstrate a real improvement of the physical skills with such a technology.
• Next step of this project is to more clearly analyze how to involve such an approach
– in a real learning process and with low cost systems. 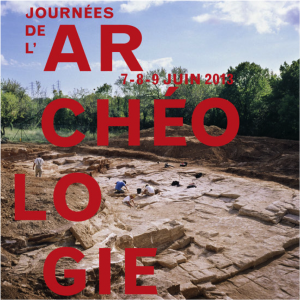 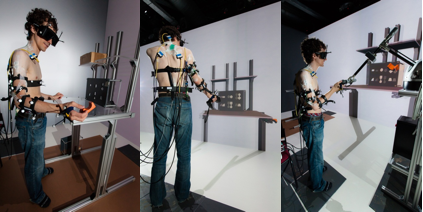 The objectives of the VR-GO – Ergonomics in virtual environment project are to perform manual handling tasks in both real environment (RE) and virtual environment (VE). More specifically, the effects of VE, without or with force feedback, compared with RE are analyzed in terms of changes in the movement pattern and muscle coordination by means of kinetic, kinematics and multi-channel surface electromyography (EMG) recordings.

The research involved sixteen healthy subjects without known neuromuscular disorders or pain, and without previous experience in VR. Their task consisted of grabbing wooden objects from a shelf and passing it through a work panel if it fits, otherwise they have to set it aside on a disposal shelf. Volunteers repeated the task 12 times with six fitting (fitter) objects and six non-fitting (non-fitter) objects. The task was performed at two timing regimes: as fast as possible and time managed.

Recordings & Results: All the recordings were performed using Immersia facilities, which include a high-resolution stereoscopic immersion room with a wall and a floor, 3D glasses tracked with a 360° tracking system and 16 ART infrared cameras (IRISA Rennes, France) and EMG amplifiers (Aalborg University, Denmark).

We found significant differences between measured indicators in RE and VE. RULA score and AMAs tended to decrease in VE under the same task conditions, whereas TTT and RPE tended to increase. This indicates that even if VE resulted in more comfortable postures, subjects experienced more discomfort and more fatigue in VE than in RE, in accordance with the questionnaire results. Fairly good correlation levels were found between VE and RE for six of the objective indicators, i.e. RULA score, Erector Spinae AMA, Deltoideus Medialis AMA, Biceps Brachii, Triceps Long Head AMA and Flexor Carpi Ulnaris AMA.

In Samani et al (2012), high density EMG was recorded over trapezius and split into its cycles. The linear envelop of EMG was computed across cycle and resampled in time to get 20 samples representing a cycle in five percent intervals. The EMG was ordered in a 13×4 grid to map its spatial configuration. The disparity, similarity and center of spatial distribution of EMG maps were compared for the three platforms in terms of normalized mutual information and center of the gravity of the maps. The virtual platform indicated a fair similarity and comparable disparity with the real platform, but depending on the timing regime and object type (fitter/non-fitter), the force feedback platform differed from the real one.

Conclusions: Using VR for ergonomics purposes needs to be done with caution, as interaction and simulation choices deeply affect cognition and motor control. Such assessment can be done if the offset between VE and RE is defined and taken into account. The use of force feedback in VE was especially challenging. Finally, designing a VE simulator relies on a compromise between functional and subjective fidelity, as subjective experience may be counter-productive in terms of functionality.

Immersia platform has been funded by a “”Contrat de Projet Etat-Région CPER) 2007-2013”, with Inria, the French state, the Regional Council of Brittany, the General Council of Ille et Vilaine, and Rennes Metropole, for an amount of 940 000 €. University of Rennes 1, INSA of Rennes, and CNRS have participated to the funding of the equipment. The platform is hosted by University of Rennes 1, in the “Espace des Technologies Innovantes”.

Scale 1 car in the GVT factory, with OpenMASK 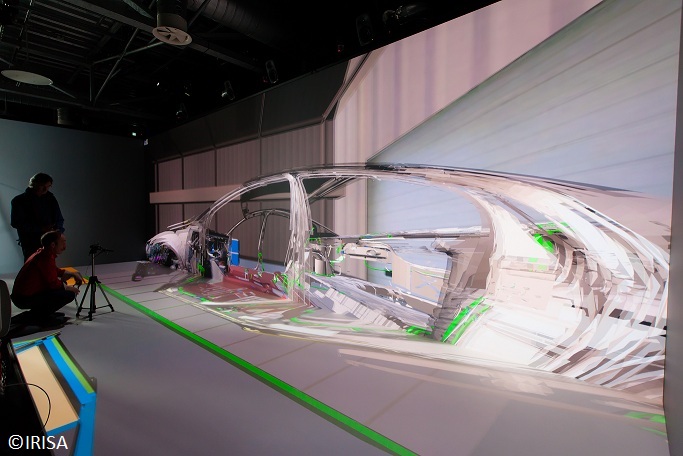